On the Internet (Thinking in Action)


Drawing on a diverse array of thinkers from Plato to Kierkegaard, On the Internet is one of the first books to bring philosophical insight to the debate on how far the internet can and cannot take us.
Dreyfus shows us the roots of the disembodied, free floating web surfer in Descartes' separation of mind and body, and how Kierkegaard's insights into the birth of the modern reading public anticipate the news-hungry, but disinterested risk avoiding internet junkie. Drawing on recent studies of the isolation experienced by many internet users, Dreyfus shows how the internet's privatisation of experience ignores essential human capacities such as trust, moods, risk, shared local concerns and commitment. On the Internet is essential reading for anyone on line and all those interested in our place in the e-revolution.
Pubblicato da old a lunedì, ottobre 31, 2011 Nessun commento: Link a questo post

Rhizome (With no return)

From structure to rhizome: transdisciplinarity in French thought (2)

Eric Alliez
In the invitation to speakers for the conference From Structure to Rhizome, we suggested that talks might set out by re-examining (and hence ‘re-founding’) texts that we qualified – in far too rapid and expeditious a fashion – as ‘founding’. But we did notmake this suggestion without being conscious of the difficulty involved in the very idea of a ‘foundation’ for transdisciplinarity. The difference induced by the (re-founding) repetition and its pluralization attenuates and relativizes this difficulty without, however, resolving it. This is because founding, as the young Deleuze explained at the start of the ‘Hypokhagne’ course he gave at the Lycée Louis le Grand in 1956–57, is literally to lay claim to (and to root oneself in) a foundation. Thus, it is ‘no longer to relate one’s activity to oneself as an agent’, by opening up the possibility of grasping the necessary passage to a philosophy that gives a right to the foundation – by founding its rights in a re-flexion that renders it possible and necessaryat the most fundamental level. We have to understand that, even if it means appealing to an unconditioned principle, to found is always to determine the indeterminate in an immanent fashion.
Since Deleuze’s course is available on Web Deleuze, I will leave it to readers to discover both the way in which he conducts his enquiry – driving out some nice little monsters – and a principle of repetition that already has very Nietzschean contours (redrawn by the anti-Hegelian Tarde of L’Opposition universelle) and that will take on its full extent only some ten years later inDifference and Repetition. The importance of this Nietzschean reference for our questioning with regard to transdisciplinarity – which also concerns Foucault (both of them passing via Canguilhem) – cannot be emphasized enough in so far as Nietzsche introduces philosophy into a ‘new element’, in a new and anti-classical image of thought through a critique of philosophy.

What I would like to emphasize at the outset, to profit immediately from the instantaneous acceleration it produces (even if it means keeping it in reserve,taking my foot off the pedal), is the fashion in which, taken as the letter of the ‘immanent determination of the indeterminate’, the foundation transpires from a language that establishes a philosophical primacy in immanence that contradicts the ‘strongest programme’ of transdisciplinarity in its most critical relation to philosophy. The codename for this programme is ‘rhizome’. But this does not forbid – rather it calls for – the development of the philosophical foundation in science and the (badly named) human sciences, to which the programme of transdisciplinary research arising from structuralism is attached. ‘No longer to relate one’s activity to oneself as an agent’, Deleuze thus stated in 1956, so as to submit oneself to a foundation that will present itself as a third – the ‘third foundation’, like the French ‘Third Estate’. Deleuze explains that ‘the foundation is the third because it is neither the pretender, nor what it pretends to, but the instance that makes what is pretended docile enough for the pretender.’2 We should hear in these phrases a double, structural and Nietzschean, echo. And, indeed, something of the order of a post-Nietzschean critiqueof structuralism will finally – under the heading of a ‘Nietzsche today’, hurled at the philosophical Order – be given the name ‘nomad thought’. [...]

Radical Philosophy is a UK-based journal of socialist and feminist philosophy. The journal appears 6 times a year and features major academic articles, commentaries, news and a large & diverse reviews section. 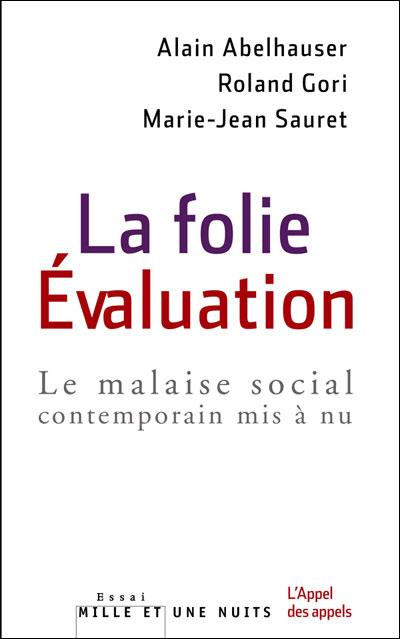 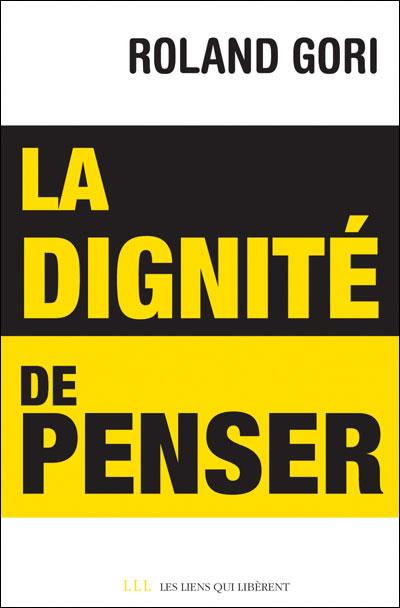 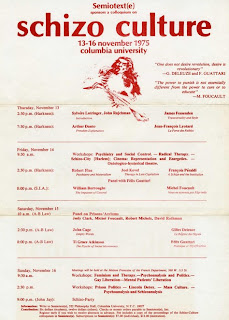 SEMIOTEXTE is looking for testimonies of people who attended  the SCHIZO-CULTURE Conference organized at Columbia University in 1975 for an upcoming book.
It will include the texts of all the lectures and panels and a detail account of the events.
Please send your contact info to: Hedi El Kholti: hedi@semiotexte.com
Pubblicato da UT a venerdì, ottobre 28, 2011 Nessun commento: Link a questo post

In recent years, new disease threats—such as SARS, avian flu, mad cow disease, and drug-resistant strains of malaria and tuberculosis—have garnered media attention and galvanized political response. Proposals for new approaches to "securing health" against these threats have come not only from public health and medicine but also from such fields as emergency management, national security, and global humanitarianism.

This volume provides a map of this complex and rapidly transforming terrain. The editors focus on how experts, public officials, and health practitioners work to define what it means to "secure health" through concrete practices such as global humanitarian logistics, pandemic preparedness measures, vaccination campaigns, and attempts to regulate potentially dangerous new biotechnologies.

As the contributions show, despite impressive activity in these areas, the field of "biosecurity interventions" remains unstable. Many basic questions are only beginning to be addressed: Who decides what counts as a biosecurity problem? Who is responsible for taking action, and how is the efficacy of a given intervention to be evaluated? It is crucial to address such questions today, when responses to new problems of health and security are still taking shape. In this context, this volume offers a form of critical and reflexive knowledge that examines how technical efforts to increase biosecurity relate to the political and ethical challenges of living with risk.
Andrew Lakoff is associate professor in the Department of Sociology and the Program in Science Studies, University of California, San Diego. His book Pharmaceutical Reason: Knowledge and Value in Global Psychiatry examines epistemological debates on the source of mental disorders. His current work focuses on the development of techniques of preparedness among security experts in the United States.

Stephen J. Collier is assistant professor in the Graduate Program in International Affairs at the New School. He is coeditor of Global Assemblages: Technology, Politics, and Ethics as Anthropological Problems and is completing a book on urbanism, social modernity, and neoliberal reform in contemporary Russia entitled Post-Soviet Social: "Neoliberalism" after the Washington Consensus. Currently he is engaged in research on new approaches to risk mapping and systems vulnerability.
top of page
Pubblicato da old a mercoledì, ottobre 26, 2011 Nessun commento: Link a questo post

In the past twenty years Economy and Society has been decisive in developing Michel Foucault’s analyses
of ‘governmentality’, pressing this concept into service in new domains. In a wide range of articles written from
diverse disciplinary backgrounds, scholars have clarified the conceptual vocabulary and empirical vitality of the
notion of ‘the conduct of conduct’ for political and social analysis. In addition to a special issue dedicated to this
theme (‘Liberalism, Neo-Liberalism and Governmentality’ 22.3, 1993), there has been debate about the
relationships that may pertain between liberal government, despotism and authoritarianism (Valverde 1996,
Dean 2001), consideration of the ways in which Foucault’s conceptual vocabulary can help to reframe
key problems in political theory (Burchell 1993, Hunter 1990, Hindess 1997, Pasquino 1993), analysis
of the implications of Foucault’s work for the methodological assumptions of the human sciences,
and for the analysis of the social, including the government of diverse fields such as health,
poverty, unemployment, policing, risk, and ethical conduct (Osborne 1993, Rose 1996, Dean 1992, O’Malley 1992, Cruikshank 1993).  The journal has housed debate about the significance of governmentality outside western liberal
contexts (eg Sigley 1996, Keane 2002), and concerning the transformations of government produced by new
technologies of warfare and welfare (Donzelot 2008, O’Malley 2010).

AbstractThis paper argues that Foucault’s genealogy of racism deserves appreciation due to the highly original concept of racism as biopolitical government. Modern racism, according to Foucault, is not merely an irrational prejudice, a form of socio-political discrimination, or an ideological motive in a political doctrine; rather, it is a form of government that is designed to manage a population. The paper seeks to advance this argument by reconstructing Foucault’s unfinished project of a genealogy of racism. Initially, the paper situates the genealogy of racism within the context of Foucault’s work. It belongs to a period of transition between the mature and the late part of Foucault’s work, more specifically a period of transition from discipline to governmentality. The paper proceeds by reading closely key passages from the 1976 lectures at Collège de France in which Foucault proposes to rethink racism as a form of biopolitical government. While Foucault’s genealogy of racism remains an incomplete project, lacking for example any substantial treatment of European colonialism, the paper proposes to expand the Foucauldian analysis by linking it to the pan-German discourse between 1890 and 1914. Finally, the paper reflects on some of the implications of the Foucauldian analysis, in particular attempts to understand and counter contemporary forms of racism. Foucault’s genealogy of racism, in short, shows us the constructedness of our racialized world and challenges us to develop new and more effective strategies to change it.
Pubblicato da old a martedì, ottobre 25, 2011 Nessun commento: Link a questo post

Illuminations. Berkeley's online magazine of research in the arts and humanities