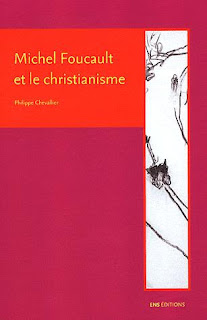 A note on Philippe Chevallier’s Michel Foucault et le christianisme
by Colin Gordon, July 2012
See here for details of the book
Philippe Chevallier’s Michel Foucault et le christianisme was published in France by ENS Editions  last December. Foucault’s recently, and imminently to be published work (notably the 1984,  1980 and Louvain lectures) are adding substantially to the available fraction of his unfinished work on the Christian genealogy and archaeology of knowledge, power and ethics, and it is likely that earlier major works including theHistory of Madness will be profitably revisited in this new light. The picture is not yet complete: there are two full-length manuscripts from the History of Sexuality, one abandoned text dating from 1978 (“Le corps et la chair” until recently thought to have been destroyed), and a draft version of the volume 4 (“Les aveux de la chair”), announced just before Foucault’s death. The evidence base on Foucault and Christianity is growing and will most probably go on growing for an unknown length of time. Some new developments are likely to follow from the publicly reported moves currently under way to house Foucault’s papers in a public archive – most probably the Bibliothèque Nationale de France.
For the moment,  Philippe Chevallier’s major survey offers us the most informed and complete picture of the new terrain available to us: it should be translated as soon as possible. The  core of the book deals which the 1980 lectures on The Government of the Living, which will be published in France this October and in English next year. This course, as is well known, marked the start of the five-year period of what Foucault called his  “Greco-Roman trip” and which with minor digression occupied the remainder of his Paris course, though he assured his auditors at the very end, in 1984, that he was about to return to modern time. Additional material covered includes all the published works back to the earliest years, plus a fairly thorough coverage of the other lecture series both published and unpublished – such as the discussions of the history of the confessional in Psychiatric Power and of the pastoral in Security, Territory, Population.
There is one sensational scoop – albeit handled here with discretion: Chevallier was given access by Daniel Defert to an unclassified file which proved to be a chapter of  “Le corps et le chair”, dealing with 16th and 17th French manuals for confessors.  He also had had access to information about Foucault’s working library, his research notes, records of works consulted, and filing cards. His book, condensed from a doctoral thesis, weaves together many layers, from the way Foucault worked on his texts, which editions of the Church Fathers he used in his research and teaching, to the question of how and why Christianity came to figure (as not all readers of Foucault might until recently have supposed it would) as a specific object of investigation in his overall programme, and, finally, to that investigation’s findings. An appendix offers a bold outline of how a “strategic history of Christianity” might be completed working from the fragments Foucault left us.
Chevallier is a reliable and learned guide to the respective intricacies of patristic learning and Foucault’s footsteps (his findings are repeatedly cited by Michel Senellart, editor of the forthcoming edition of  The Government of the Living), but he carries his Jesuit-trained erudition lightly, his writing  is unfailingly elegant and lucid, and the intellectual quest he leads us on grips the interest to the end. One of his key points is that  Foucault changes his method of working in 1980 at the same time as he changes his domain; that Foucault discerns, creates and invents a new layer of analysis and thematics within the Patristic text – the layer concerning acts and practices of truth; and that this focus – a specific way of working on the patristic texts at a distinctive and   unconventional semantic depth – makes possible the discovery of new objects and events while at the some time de-emphasising other important, indeed essential components of the Christian phenomenon. The final finding of the 1980 course which Chevallier leads us to is that Christianity is the discoverer or inventor something unknown to ancient philosophy – an intuition of the inherently precarious nature of our relationship to  truth.
I attended one of Foucault’s 1980 lectures on the sacrament of baptism and I can remember confessing to him afterwards that I had found it heavy going; he was characteristically elated at this feedback, which he took (mistakenly) as a sign that his weekly audience numbers might be about to decline. It has, through no fault of Foucault’s, taken a long time for the full point of the “Greco-Roman trip” to become evident. Philippe Chevallier’s book significantly helps us to fill in this picture. Everyone interested in Foucault should have access to it.