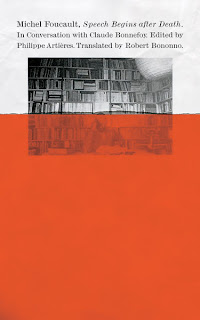 
Michel Foucault (1926–1984) was a French historian and philosopher associated with the structuralist and poststructuralist movements. He is often considered the most influential social theorist of the second half of the twentieth century, not only in philosophy but in a wide range of disciplines in the humanities and social sciences. Among his most notable books are Madness and Civilization, Discipline and Punish, and The History of Sexuality.
Philippe Artières is director of research at the CNRS and president of the Centre Michel Foucault.
Robert Bononno is an award-winning translator of literary and cultural books.
Contents:
Editor’s Note
Introduction: Foucault and Audiography Philippe Artières
Interview between Michel Foucault and Claude Bonnefoy, 1968
Chronologies of Michel Foucault and Claude Bonnefoy
Read more
Pubblicato da UT a mercoledì, maggio 01, 2013