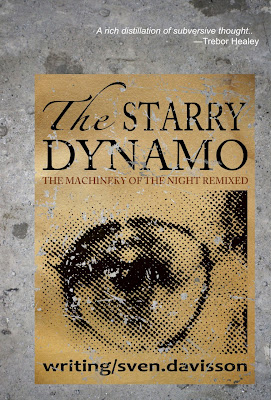 Praise for The Starry Dynamo
"The Starry Dynamo is a compelling and seductive collection. Sven Davisson’s work is erotic, haunting, spiritual and unafraid to take chances. A bold and riveting book."-Emanuel Xavier editor of Bullets & Butterflies and author of Christlike
"The bastard lovechild of William Burroughs and Aliester Crowley—or was he spawned of an orgy involving Rajneesh, Pan, Ginsberg, Foucault and a dozen or so of Burroughs North African wildboys? Davisson’s vision is a rich distillation of subversive thought. Tribal, mythic, punk and anarchic, Davisson is a serious thinker with the spirit of a mischievous sprite."—Trebor Healeyauthor of Sweet Son of Pan
"The most interesting and experimental piece, titled “Mutilations,” involves incest and child sexuality and abuse. It’s written in a way that violates all traditional “unities,”: place, time, person. And, in doing so, poignantly and beautifully captures the feeling of being “mutilated” the author means to communicate in the story, whether fiction or non-fiction.
"Following is a series of essays about a variety of topics: the Indian guru Rajneesh and the rise and fall of his compound in Oregon, the French Symbolist poets, Oscar Wilde, the Beat Generation writer William S. Burroughs and several about the ideas of the French philosopher of sexuality Michael Foucault. I want to especially recommend this book for these specific chapters. I found I understood Foucault better while reading Sven Davisson than I have ever before (i.e. that at any given time and place in human history ideas about sex—and sexual orientation—are influenced by a vast array of factors of history, politics, culture, economics, etc. and so always have to be understood in context).
"This is an interesting and—to use Davisson’s own term, experimental—book that deserves to be read, written by an important character in the long term history of Gay consciousness." —Toby Johnson in White Crane Journal
Sven Davisson is the founding editor of Ashé! Journal of Experimental Spirituality.  A rebel-publishing pioneer, Davisson edited the small, yet groundbreaking, zine mektoub from 1989-1995.  During that time, he also received a degree in Queer Theory from Hampshire College and studied photography with Jerome Leibling (of the New York Photo League).  In addition to Ashé, his work has appeared in Abrasax: Journal of Magick & Decadence, sneerzine, The New Aeon, mektoub, Lambda Book Report and Velvet Mafia as well as the collections I Do/I Don’t: Queers On Marriage and Madder Love: Queer Men and the Precincts of Surrealism.
Read more on Satori Rebel Press website
Pubblicato da UT a domenica, ottobre 07, 2012