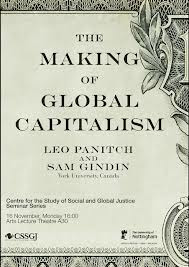 The Making of Global Capitalism: The Political Economy of American Empire

A groundbreaking account of America's role in global capitalism.
The all-encompassing embrace of world capitalism at the beginning of the twenty-first century was generally attributed to the superiority of competitive markets. Globalization had appeared to be the natural outcome of this unstoppable process. But today, with global markets roiling and increasingly reliant on state intervention to stay afloat, it has become clear that markets and states aren’t straightforwardly opposing forces.
In this groundbreaking work, Leo Panitch and Sam Gindin demonstrate the intimate relationship between modern capitalism and the American state, including its role as an “informal empire” promoting free trade and capital movements. Through a powerful historical survey, they show how the US has superintended the restructuring of other states in favor of competitive markets and coordinated the management of increasingly frequent financial crises.
The Making of Global Capitalism, through its highly original analysis of the first great economic crisis of the twenty-first century, identifies the centrality of the social conflicts that occur within states rather than between them. These emerging fault lines hold out the possibility of new political movements transforming nation states and transcending global markets.