Eric Hazan and Giorgio Agamben on Tiqqun, Foucault and many other controversial things (somewhere, April 18, 2010) 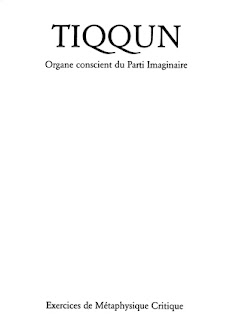 Presentation from the editor :
Given that union bureaucrats have nothing worse to fear than the effective emancipation of workers, the worst enemy of intellectuals is truth, which puts them out of work. Nowadays, their function is to accompany with their blabber the creation of events – for example “09/11″ or more recently “the crisis” – by means of which the Empire justifies the accelerated planetary deployment of its mechanisms. Of course, there are other ways of using one’s intelligence; the productions of which are instantly recognizable to our times’ sore disregard towards them. No one – and especially not its supporters – seems to have thought of giving credit to Tiqqun for having understood the physiognomy of our times, its lines of power and its weaknesses with an almost prophetic lucidity. Being right is a good start, but one must act consequently; and that is why Tiqqun – publishing so seldom that it was more than once taken for dead – has meant a lot more than just a magazine to the last ten years : a part of a resistance plan that has been growing in depth and intensity. That lives have affiliated themselves with what has here been deemed true is a strong enough blow dealt to the ambient cynicism to justify being called a “terrorist”. (Tiqqun)
Conscious fraction of the Parti Imaginaire, Tiqqun believes that truth doesn’t need to be signed with a name, practices anonymity like others practice terrorism, is comfortable with all forms of sabotage to come, does not criticize “society” to improve it, spreads doubt about the very existence of the latter, attempts at shedding light on the stratagems of an interior enemy, faceless, engaged in a permanent conspiracy against this fiction and anticipates a mass desertion of the social corpse.

Tiqqun Apocrypha Repost by Anarchist without content: Read more
A kind NYC blogger did a quick-dirty translation of the Agamben/Hazan discussion on Tiqqun. It was later taken down. I can’t speak to the quality of the translation, some things are obviously wrong (for instance the translator remarks that FC is male when in fact she is female…). I also do not know why it was taken down.
A few quick notes – the re-publication of the Tiqqun texts by La Fabrique weren’t without controversy among those who formerly made up Tiqqun, we see some of these issues arise in the panel. Additionally, I’m not sure why or who it was in the audience who kept on pushing Agamben on perceived issues of ‘praxis’ (so much so that he got up and left). The second half of the video (the exchanges between people) seems to be missing now, too. I don’t know if it was taken down in order to make the debate no longer public (which is reasonable if the issues could be settled between friends) or other reasons....
Pubblicato da UT a martedì, gennaio 17, 2012