DISCIPLINE, SECURITY AND BEYOND 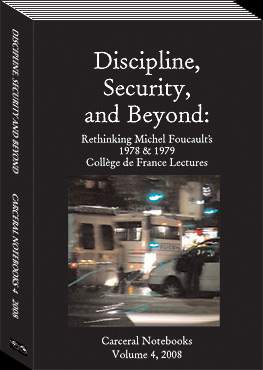 DISCIPLINE, SECURITY AND BEYOND
The Carceral Notebooks
Volume 4, 2008
Mass incarceration, order maintenance, preventative detention, actu-
arial prediction instruments, felon disenfranchisement, sex offender reg-
istries, habitual offender enhancements-these punitive practices characterize
the contemporary landscape of our penal state. Michel Foucault’s seminal
work, Discipline and Punish (1975), fundamentally transformed critical
thought on punishment practices and institutions in the mid-1970s. The
concept of discipline and the larger critique of power/knowledge were
deployed by many critical theorists to reexamine the rehabilitative project
and the penal practices that pervaded the carceral sphere. In the years imme-
diately following publication of Discipline and Punish, Michel Foucault
delivered lectures at the Collège de France—some of which were published
and some translated—that gave rise to other currents of critique in the
penal field. These critiques, which became known as “governmentality stud-
ies” and centered on the notions of biopower, sécurité, neo-liberal political
economy and governance, blossomed in the early 1990s but simultaneously
created significant tension with the disciplinary paradigm.
With the release in 2004 of the complete lectures of Michel Foucault—
Sécurité, Territoire, Population (1978) and Naissance de la Biopolitique
(1979) —the internal tensions between these different ways of conceptual-
izing the penal field increased. Today, with a few years distance from the pub-
lication of the 1978 and 1979 Cours and at the thirtieth anniversary of their
delivery, it may be possible to rethink the lectures and their influence on the
way we discuss punishment, penality, and the carceral sphere. The purpose of
this volume is to explore new readings of the Cours and of Discipline and
Punishwith an eye toward developing better understandings and more pow-
erful critiques of our current punishment practices, as well as social and polit-
ical institutions implicated in the carceral form. I have learned a lot from
reading these chapters. I hope you will enjoy them too.
Pubblicato da old a giovedì, novembre 03, 2011