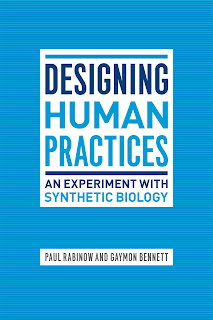 INTRODUCTION
In early May 2007, Rabinow called for “secession,” in Blumenberg’s sense of refusing predominant practices, concepts, and problems, where they prove unhelpful for work on the problematization at hand. Scientifically and ethically, relations among and between the life sciences, human sciences, and ethics need sustained re-thinking and re-working. Such labor cannot be conducted, it seemed to us, unless the adequacy of reigning habits, dispositions, and deliverables are vigorously contested. It was at that point of secession that a period of extremely intense conceptual work began, culminating several months later in the production of a diagnostic grid for re-thinking relations among the life sciences, human sciences, and ethics (http://bios-technika.net/diagnostics-grid. html). This diagnostic grid has remained in the background, functioning as a powerful conceptual tool for the practice of orientation,production, and verification.

What follows in the first section of this appendix should be read as a kind of “users-guide” to our human practices diagnostic. The diagnostic (see the second part of the appendix) is composed of four tables consisting of categories and conceptual distinctions. It is designed to aid inquiry, and, where appropriate and possible, the design and composition of equipment. The tables, categories, and distinctions are not representational. In fashioning them we did not suffer the conceit often attributed to the functionalist projects of the early 20th century; we do not presume that our categories are comprehensive, and thereby adequate, if abstract, distillations of the real essence of things across comparative domains.
DIAGNOSIS
Diagnosis has two functions.The first is analytic. It functions to lay out tables of categories.That is to say, a diagnosis serves a critical function; it facilitates the work of decomposition of complex wholes in order to test the logic on the basis of which composition has taken place. In diagnosis, the work of decomposition cannot be an end-in- itself. Rather, analysis must be followed by recom- position.This synthetic work is the second function of a diagnosis.
Cluster 1: Diagnosing Equipment: Diagnosis,Affect, Truth Claim, Ethical Mode, Equipment
Cluster 2: Critical position for Human Practices: Diagnosis, Contemporary, History of the Present, Problematization, Remediation
Cluster 3: Diagnosis of Political Spirituality: Diagnosis, Salva- tion,Veridiction, Jurisdiction, Political Spirituality