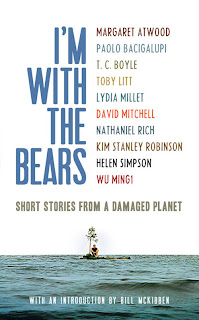 Stir: As I’m with the Bears, a collection of short stories from a damaged planet, is published, I interviewed Wu Ming 1 about his contribution, climate activism, the occupy movement and the mystery why writers on the left still do not publish under copyleft or creative commons.
Stir: In Bill McKibben’s introduction to I’m with the Bears he says that “science can only go so far…it is the role of artists to make us feel”. This expresses the limits of knowing something intellectually – “the climate science” – and emphasises that our experience of these important issues are complicated by psychological, historical, political and social forces. How important is this understanding in your own work and do you think that if we are to have any success against runaway climate change that we will have to take these considerations seriously as authors and activists?
Wu Ming 1: I’m an Italian novelist trained in continental philosophy, so this kind of reflection sounds like a truism to me. I think that there’s no real comprehension of the world without feelings. Neuroscience has demonstrated that Descartes’ concept of an abstract, disembodied, rational mind was utterly wrong, and that there’s no dichotomy between reason and emotion. Whatever “reason” is, it is embodied, and there’s really no rationality without emotions. We think through narratives based on primary metaphors, narratives whose unfolding has emotional and moral implications. By the way, this is precisely the reason why I prefer “continental philosophy” over “analytic philosophy”. I think that fans of analytic philosophy tend to have a somewhat narrow-minded idea of what the mind is and what language can do, they tend to focus almost exclusively on logic and the empirical realm, while continental philosophy in all its strands (Hegel, Nietzsche, Heidegger, Deleuze, Foucault etc.) has tried to re-invent language in order to force us into thinking in different ways, into grasping the world not only as it is but as it could be. What continental philosophy is about is casting different glances on the world. That’s why continental philosophy developed a very fruitful relationship with poetry and literature, and sometimes even merged with them, as is the case with Nietzsche, Deleuze, Foucault etc. Foucault’s style was described by some scholars as “demonstrative lyricism”. When Rudolf Carnap rejected Heidegger’s concepts by saying that they lacked any empirical basis, he failed to understand that Heidegger was using language in a poetic way.
(...)


Stir: You have long published under Copyleft – a license that allows noncommercial and attributive reproduction of creative works. This license, along with Creative Commons, is still largely unpopular amongst radical political publishers and authors. Why do you think this is so?


WM1: I know this answer will disappoint you, but I really don’t have a clue. To us, it is a mystery. It would seem the most rational, useful, coherent thing to do, and yet only a few people do it. Quite strange and mystifying.


I’m with the Bears is published by Verso for £8.99 and royalties from the sale of I’m with the Bears will go to 350.org, an international grassroots movement working to reduce the amount of CO2 in the atmosphere.
Wu Ming 1 is a member of the Wu Ming Foundation, grew up in the lands between Ferrara and the Adriatic Sea which are depicted in his story, and blogs at www.wumingfoundation.com
Read the complete Wu Ming1 interview @ Stir website
or Wu Ming website
Stir Magazine is licensed under a Creative Commons Attribution-NonCommercial-ShareAlike 3.0 Unported License.