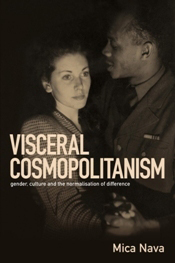 Cultural theorist Mica Nava makes an original and significant contribution to the study of cosmopolitanism by exploring everyday English urban cosmopolitanism and foregrounding the gendered, imaginative and empathetic aspects of positive engagement with cultural and racial difference.

By looking at a wide range of texts, events and biographical narratives, she traces cosmopolitanism from its marginal status at the beginning of the twentieth century to its relative normalisation today. Case studies include the promotion of cosmopolitanism by Selfridges before the first world war; relationships between white English women and 'other' men -- Jews and black GIs -- during the 1930s and 1940s; literary, cinematic and social science representations of migrants in postcolonial Britain; and Diana and Dodi's interracial romance in the 1990s. In the final chapter, the author draws on her own complex family history to illustrate the contemporary cosmopolitan London experience.

Scholars have tended to ignore the oppositional cultures of antiracism and social inclusivity. This groundbreaking study redresses this imbalance and offers a sophisticated account of the uneven history of vernacular cosmopolitanism.

Mica Nava is Professor of Cultural Studies at the University of East London.

I. INTRODUCTION
Chapter 1
Cosmopolitanism, Everyday Culture and Structures of Feeling: The Intellectual Framework of the Book

II. COSMOPOLITANISM AND COMMERCIAL CULTURE 1910s-1920s
Chapter 2
The Allure of Difference: Selfridges, the Russian Ballet and the Tango
Chapter 3
'The Big Shop Controversy': Ideological Communities and the Chesterton-Selfridge Dispute

III. DIFFERENCE AND DESIRE IN 1930s-1940s
Chapter 4
The Unconscious and Others: Inclusivity, Jews and the Eroticisation of Difference
Chapter 5
White Women and Black Men: The Negro as Signifier of Modernity in Wartime Britain